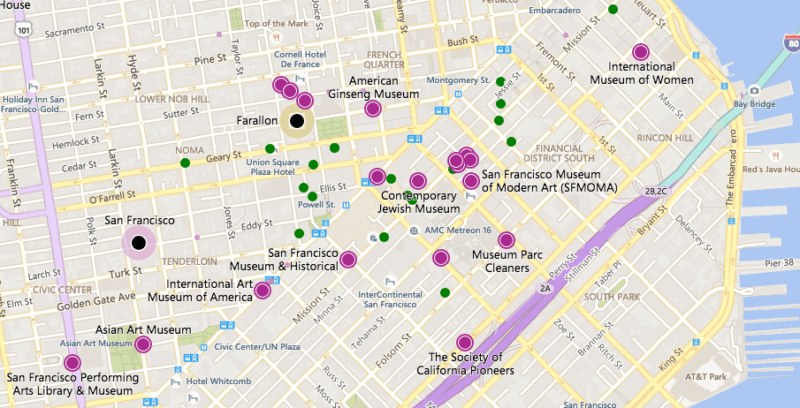 Earlier today Microsoft announced the next version of Bing Maps will offer many new features, enhanced content and multiple design enhancements. Users can see that version of the new Bing Maps in action today by opting in to Bing Maps Preview.

There’s an emphasis on context, exploration and planning, rather than isolated lookups, which is currently the dominant use case for maps. Overall, the new version of Bing Maps gets much closer to Google Maps in terms of functionality and in some areas exceeds it with a more user-friendly experience. There’s also a quasi-assist from MapQuest, with Bing emulating the former’s “layered” results which allow simultaneous display of multiple category searches on the same map area.

Google Maps has a nearby search feature (one of my favorites) that allows users to find a location and then search for other types of businesses around it. But you can’t search for several business categories and see them plotted on the same map (e.g., restaurants and hotels and museums). Each new query or category search must be executed separately.

In the new Bing Maps, however, users can create layers of results around a specific point or area, as indicated in the screenshot immediately above. These can be initiated, as with MapQuest, either by clicking designated icons (restaurants, hotels, parking, clinics, etc) or by manually entering a customized query. Each set of results is saved in a tab.

Users can move back and forth freely between these tabs or layers of results. Clicking on an individual map listing brings up a profile with associated content and functionality (e.g., reservations) in the left panel. A right click on a map listing offers the additional option to see street-level images, which can then be expanded if desired. This is generally easier than having to drag Pegman to a specific point in Google Maps.

Individual listings can be saved in Bing and Google Maps (nothing new there). However new Bing Maps users can plan a visit to, say, New York and look for hotels, restaurants, attractions all on one map rather than conducting multiple searches. Google Maps fans may scoff that this isn’t a big deal but it’s more efficient to be able to see the distances and relationships between all these business locations on a single map.

Philosophically, the new Bing Maps are oriented toward planning and multi-step task completion, which is one of the animating principles behind Bing search in its early differentiation strategy vs. Google. It will be especially useful for people who are doing travel and vacation planning but less valuable for people just seeking business listings data or directions from A to B.

Paradoxically Bing is introducing these upgrades at a time when it seems to be increasingly cost sensitive and willing to shed non-essential or non-performing assets. For example. Microsoft recently transferred its maps imaging technology and related employees to Uber and will now license that content rather than owning it directly. This suggests the company is no longer willing to go head to head with Google Maps across the board.

This doesn’t diminish the value of the new improvements, which may be most appreciated by power users of maps. The challenge for Bing is generating awareness and getting people who are so familiar and comfortable with the look, feel and functionality of Google Maps to take a another look.