Google’s Snack Packs (a.k.a Local Stacks) haven’t gotten the best reception in the local business community. Many people feel these results serve Google itself more so than the local businesses they feature. For this reason, it may be more important than ever to make sure your local search marketing is both accurate and thorough. In this post, we’ll dive into why.

Let’s take one of these results apart and discover how best to respond to their limitations.

I was never a fan of Google’s Carousel. The vivid, image-oriented, horizontal display moved me out of my comfort zone after a decade or so of easy familiarity with the minimalist blue/grey/green palette of more traditional packs. A few orange stars here, a red teardrop marker there—like most Google users, I had been conditioned to see and understand these elements of pack results at a glance. The carousel felt like a shocking departure from the simplicity I consider to be a chief hallmark of Google’s historic style. I wasn’t sorry to bid them farewell … until I got my first look at the Snack Packs that have now become the standard results for hospitality and entertainment searches.

Bearing in mind that “Google’s goal is to provide users with the most relevant results and a great user experience,” please join me in dissecting the parts of a single Snack Pack entry to see if you think it’s living up to Google’s stated purpose.

Key to the Snack Pack

Here we’re going to see what each of the elements of this Snack Pack result for a search for “Tex Mex Restaurants” in Dallas signifies and directs us to. But before we do so, let’s quickly note what isn’t immediately accessible in this type of result:

In other words, if we want to call the business right now, or understand exactly where it’s located, or visit the website to see a menu or get the feel of the place, we’re out of luck on our first try. Instead of instant gratification, we’re going to have to start clicking around on the elements of the typical snack pack to see if Google will give us what we want. Here’s what happens when we interact with these 10 elements:

The business name is clear enough. We click on it, perhaps assuming that we’ll be going to the website of the business, as we would in an organic result, or at least to a Google+ Local page which years of Google use will have acquainted us with. Instead we end up on a secondary interface that isn’t a website and isn’t a Google+ Local page. It’s more like a large knowledge graph hanging in space above some organic results: 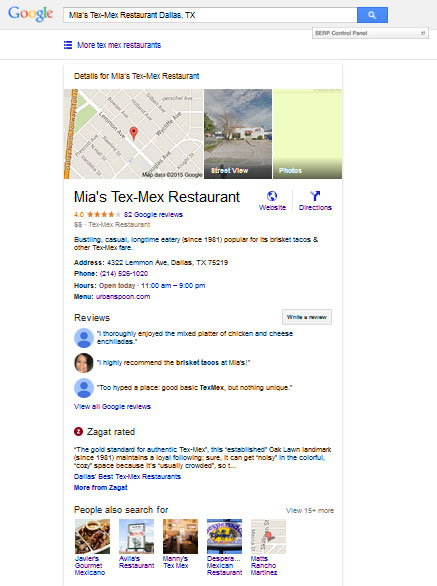 Personally, I find the hanging-in-space presentation of this secondary interface a bit odd, but at least we can now see the full address, phone number and a globe icon linking to the website. Likely, we’ve now found what we need, but I’m left asking why we had to click to get to this information. Traditional packs gave us instant, direct access to NAP+W—the core name, address phone number and website elements of any citation. By contrast, Snack Packs may make us feel that Google is holding out on us, making us click further into their own product before they’ll deliver.

Clicking on the stars and reviews also takes us to the in-space interface. Fair enough. We probably didn’t expect to see all of the Google reviews on our first try, but I do have to wonder why we don’t reach them in one click on these elements. Instead, we have to go from the second interface to a third, by clicking on the “View All Google Reviews” link. It looks like this, and is again disconnected, sitting on a greyed-out background: 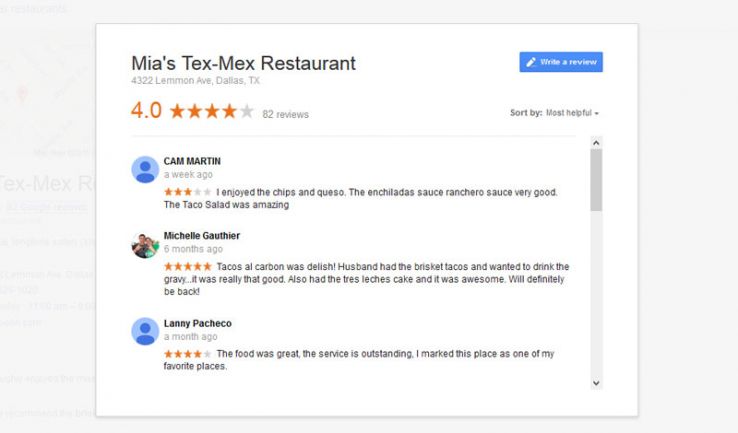 The price gauge and the word “Mexican” take us to the in-space interface. Fine enough. I confess, I’m not sure where that word “Mexican” comes from, and as a student of regional American cuisines, I’ll state for the record that Tex-Mex food is not Mexican food. I was curious enough about this to go hunt up the Google+ Local page for Mia’s Tex-Mex Restaurant.

Then, once you’re there, take a tip from Darren Shaw and click on the category on the Google+ Local page to see what appears to be a full list of the categories a business has selected: 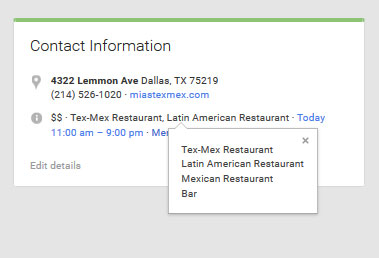 Okay, so now we’ve seen that the business did select “Mexican Restaurant” as a category, and perhaps if we visited, we’d find that they’re serving traditional Chiles en Nogada alongside the Tex-Mex standard queso dip. If the word “Mexican” in the Snack Pack display is coming from the categories, it has been abbreviated and given precedence over the primary, exact match “Tex-Mex Restaurant” category. I know the word isn’t coming from Zagat, where this restaurant is categorized as “Tex-Mex”. I’m not 100% sure about the origin of this word being given such prominence in the Snack Pack, but I guess we can let it go at that.

I really do have a bone to pick with element 6—the partial street address. What good does this do anyone? Not only are we lacking a street number to tell us exactly where the restaurant is, but the fact that there is no city shown erodes our confidence that we are, indeed, being shown a result in Dallas. We’ll have to click through to the in-space interface if we want Google to deliver the goods for us on this one.

Element 7, the sentiment snippet “longtime spot with famous brisket tacos” also takes us to the second interface. It’s not a direct quote of the business description which reads, “Bustling, casual, longtime eatery (since 1981) popular for its brisket tacos & other Tex-Mex fare.” It also doesn’t seem to originate directly from a user review, and I don’t see it described this way on Zagat. So, it appears to be a custom hybrid of sentiments Google and Zagat have created. I’m fine with this, but should it be more important to see random sentiment than a phone number in the Snack Pack? Which element do you feel is more deserving of pack real estate?

This is where I feel the average Google user may become somewhat confused, if they don’t understand that Google acquired Zagat in 2011. Clicking on the prominent Zagat logo or the wording “Zagat—Dallas’ best Tex-Mex restaurants”, one might expect to go to Zagat. But, you guessed, it—we’re going ridin’ on a freeway right back to the in-space interface, and we’re not even taken to the portion of it that shows the Zagat data. We have to scroll down to get to this:

So, now we’re kind of intrigued. What does it mean that Zagat is voting this restaurant to be one of the best? We click that link, again likely assuming that we’re going to Zagat. Instead, we get yet another interface. It looks like this, and Mia’s Tex-Mex isn’t even the first thing we see on it. It’s down at numero cuatro in some sort of Google list that appears to be branded with Zagat’s name: 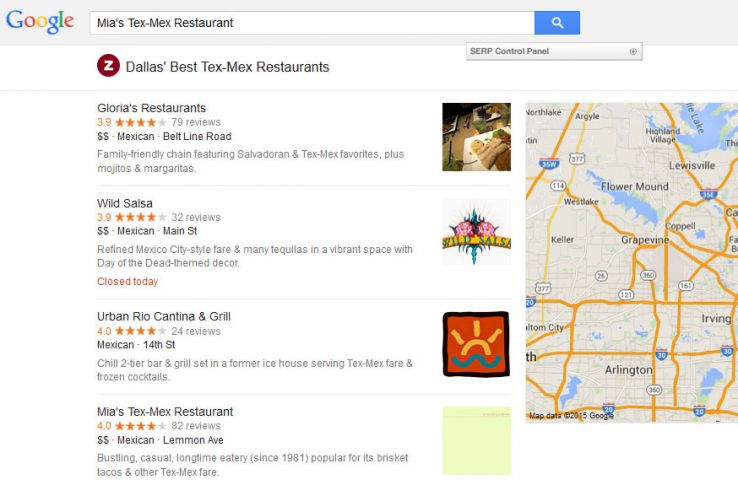 Just for fun, let’s click on Mia’s and see where we go. Que cosa? We’re back on the in-space interface yet again, and maybe feeling a bit like we’re going in circles.

There are actually pages on Zagat for these things. Here’s their page for the best Tex-Mex restaurants in Dallas, which I’ve noticed appears to have a completely different ordering of the results. It’s interesting that, instead of Google’s Snack Pack or the secondary interface taking us directly to this page, we remain firmly locked with Google’s own interfaces.

As with most of the other elements, clicking the image takes us to the secondary interface (which appears to be different than the Google+ Local image gallery interface) and that then clicks to a page like this one which also feels a bit disconnected to me.

Unfortunately for this business, their primary image isn’t doing their listing any favors, but I don’t really have a problem with having to click a couple of times to get to an image gallery.

In sum, the initial interface of the Snack Pack may feel to users a bit like stubbing one’s toe on a blunt object of questionable usefulness. I know that’s the approximate sensation I have when I encounter this display.

Google may have turned off the Carousel for restaurants, but human users are still getting quite a merry-go-round ride trying to use and interpret the Snack Pack that has replaced it. As they bounce from one Google-owned interface to another instead of being given immediate NAP+W or taken directly to owner-managed websites or Google+ Local pages, or even directly to platforms like Zagat, users are given few signals about what connects all of these disparate elements together. To me, the experience is piecemeal and lacking in cohesive glue and feels like a step backward from the clearer UX of the traditional local packs that Google has so long promoted. What do you think? In your opinion, does this search results display live up to Google’s goals of usability and quality?

However I may feel about Snack Packs, this I know: when I want to play with Google, it’s always got to be by their rules. So how can businesses like hotels, restaurants, bakeries, venues, bars, clubs, amusement parks, caterers and their marketers survive Snack Pack treatment?

The answer is clear:

Given that your customers will be interacting within a series of Google interfaces, it is now more important than ever that your Google-related marketing be as flawless as possible.

Using that secondary in-space interface as our springboard, this means that you have to get all of the following correct:

In your Google My Business dashboard

Beyond your Google My Business dashboard

Your key takeaway: Be alert to developments but don’t be dismayed—if you’re getting your marketing right, chances are good that you’ll survive any foreseeable local display change. That’s good news for local business owners and their marketers alike!