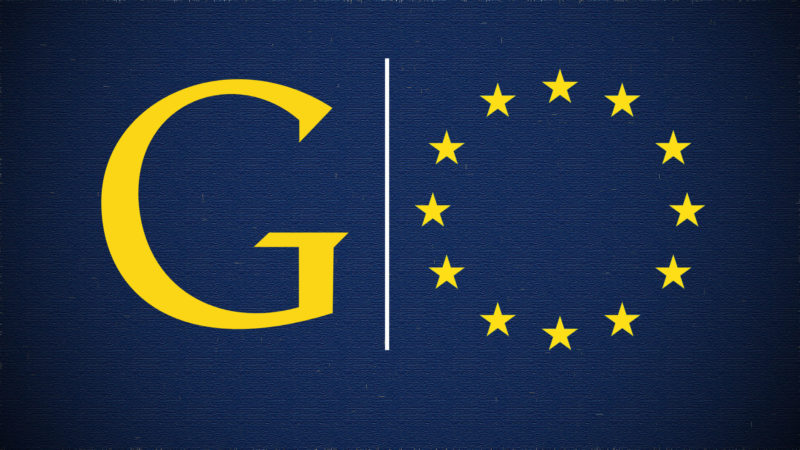 If you want a history of Google’s search battles with European antitrust regulators, a new article from Brad Stone (and colleagues) at Bloomberg will more than satisfy you. While there’s very little truly new information, the well-researched (and lengthy) piece is nearly comprehensive and captures all the intrigue as well as the evolving nature of the dispute.

The article is provocatively titled, “Google’s $6 Billion Miscalculation on the EU.” The $6 billion refers to the potential penalties and fines that Google may face in Europe. The “miscalculation” reflects some of Google’s missteps there, chief among which may have been its misplaced reliance on former European Commission competition czar Joaquín Almunia.

Almunia has now been replaced by Danish politician Margrethe Vestager, who is taking a tougher line against the company and is almost certain to seek financial penalties. For example, the article says she is now socializing the idea of fines with Google’s competitors:

Vestager is showing no sign of compromise. While the document containing her charges is secret, Bloomberg has seen a redacted version the competition authority sent to Google competitors. It says the European Commission “intends to set the fine at a level which will be sufficient to ensure deterrence.”

Prior to Vestager’s arrival, at several points over the past two years, it appeared that Google and her predecessor Almunia had struck a formal settlement deal (e.g., “rival links“). While Almunia probably had the authority to push the deal through, he didn’t feel he had the political support and, indeed, greatly underestimated the hostility to settlement with Google.

Almunia also failed to anticipate or gauge the tenacity and resourcefulness of Google’s opponents (both European and US-based) and their drive to derail the settlement agreements. Chief among them was Microsoft. But Redmond is far from alone. Opponent consortiums, such as FairSearch.org, produced several waves of research intended to undermine the settlements by arguing they would have little or no impact on rivals’ traffic or consumer behavior.

These studies were instrumental in weakening Almunia’s hand and resolve, as well as casting doubt on the fairness of the settlement terms from a PR perspective. At the same time, the Bloomberg piece describes how Google had (mis)placed its near total faith in Almunia and his political authority:

At Google’s headquarters in Mountain View, Calif., the Almunia settlement with the EU was seen as such a fait accompli that staff assigned to the case started to work on other things.

While the public discussion and debate concerns whether Google abused its “market dominance,” there’s quite a bit more intrigue and subtext — some of which has almost nothing to do with whether Google’s one-boxes or universal search benefit or harm consumers or online competition in Europe (the formal EU Statement of Objections is focused exclusively on comparison shopping).

The article goes into all this in a great deal of depth, but emotional considerations, fear and a kind of “digital nationalism” have mixed with more principled, legal concerns about preserving competition. Some of the issues playing out behind or beneath the public talking points include the following beliefs:

The fear of US internet hegemony is explicitly represented in the article by the following quote from former French Economy Minister Arnaud Montebourg:

We don’t want to be a digital colony of the U.S. Internet giants . . . What’s at stake is our sovereignty itself.

That position is exaggerated if not hysterical — though obviously there are many who feel this way, including German publisher Axel Springer. Indeed newspaper publishers in Germany and Spain promoted restrictive copyright laws effectively designed to tax Google. Both have been traffic disasters for their respective proponents.

I’m not trying to argue that Google hasn’t done anything wrong or that there shouldn’t be a hard look at its competitive practices and potential adjustments to maintain competition. What I am saying is that the Google antitrust matter has become conflated with many other issues and a surrogate for a range of other cultural, political and economic matters that are much larger than the particular issues in dispute in the antitrust case.

Google argues and I think believes that it has introduced search innovations that truly improve the user experience. Some of its competitors and those who rely on SEO as their digital lifeblood have seen conspiracies to promote Google’s own products at their expense. The truth, as always, lies somewhere in-between.

One of the interesting anecdotes in the article involves the shopping engine Foundem and the early days of Google’s troubles in Europe:

There was nothing particularly special about Foundem, but in 2006, Google, as it frequently does, updated its search algorithms. Suddenly Foundem was a lot less visible in search results. Shivaun [Raff, co-founder of Foundem], an articulate and tenacious advocate for her tiny site, spent a few years trying to get Google to tell her what had happened and how to get her company out of the algorithmic penalty box. Google, characteristically opaque about its internal workings, didn’t say much.

In 2009 the Raffs filed the first antitrust complaint against Google in Brussels. They also hooked up with Gary Reback. A Silicon Valley lawyer and serial agitator who had represented Netscape against Microsoft in its 1990s antitrust case, Reback helped the Raffs make the rounds in Washington . . .

Google justifies its actions and product innovations as responding to the needs, behaviors and desires of its users. However as it has matured and come under greater market and investor pressure the company has become equally motivated to generate more revenue from advertisers and not all its actions can be said to be in the best interests of users.

By the same token, some — though not all — of the antitrust critics suggest a kind of entitlement mindset. There’s often an implicit argument that Google should do nothing to adversely impact “their traffic.” When it does happen there’s also sometimes an accompanying sense of anger or betrayal, as in the Foundem example.

Yet Google, though extremely powerful, is not the only channel for exposure. Mobile apps and Facebook, for example, have become effective alternatives for many companies and brands. In particular Facebook has become for some (e.g., BuzzFeed) a much more effective promotional tool than Google. Facebook’s Sheryl Sandberg is also pitching the company’s marketing solutions to local businesses as the only ones needed to succeed:

One of the business owners I met [in London] was Kelly Wright, a single mom who started selling dresses from her home. She began by shooting videos of her dresses on her mobile phone and promoting them on Facebook for just a few pounds. Using Facebook as her only marketing channel, Kelly grew her business, Krista Lee Fashion, to over £3 million pounds annually and she now has 10 employees.

Google still needs to formally respond to the EU Statement of Objections. However it’s likely now that the company will be fined and forced to make more dramatic changes to its SERP than it would have had the Almunia settlement been finalized. Yet in some sense the search party has already moved on from the desktop and the real action is now in the mobile SERP.

Indeed, Android is the next Google antitrust matter up before the European Commission.